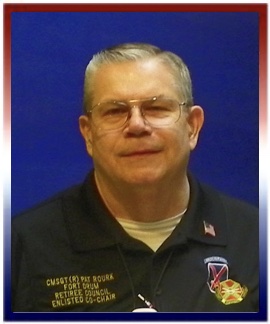 Initially retiring after a 24-year career in the United States Air Force, in 1990, as a Security Police Superintendent and Director of Security, Chief Rourk attained a position at St. Lawrence County as an Employment and Training Coordinator and sub-sequentially was appointed as the Director of the Veteran Service Department in 1997.  He officially retired from St. Lawrence County, NY on December 31, 2011.

A multi-talented police officer, CMSgt Rourk wrote and inspected security and police policy for the US Air Force, was a member of the Inspector General staff for Security Police, a Superintendent in a multi-national Security Forces Group and Squadron, and the Director of Security for the first combined International Army and Air Force General/Flag Officer training and computerized war-gaming facility.

He holds degrees in Criminal Justice and Industrial Security, a certificate in Police Science from the University of Virginia and is a graduate of the Federal Bureau of Investigations ~ National Academy (Class 126 – 1981).

Living in Norwood NY, he is married to Patricia M. (Dean) Rourk, and has a son Dean (Sheri), daughter Kelly (Dan), 5 grandchildren and 4 great grandchildren.